Beaches, Views and Wildlife in the Gold Coast

With beaches, theme parks and World Heritage–listed rainforests within easy access, the Gold Coast is a fun-filled destination for team building challenges and incentive trips, supported by state-of-the-art infrastructure and more than 40,000 hotel rooms. Discover the excitement of the Gold Coast in this three-day itinerary.

Morning
Begin your day at Currumbin Wildlife Sanctuary. After enjoying breakfast in the park, join an exclusive tour where you can feed kangaroos, have your photo taken while cuddling a koala and listen to educational talks at the animal hospital. To get your pulse racing, try the TreeTop Challenge, which includes a flying fox (zip-line) over the crocodile enclosure. Next, take a seven-minute drive to Elephant Rock at Currumbin Beach, where you can climb the stairs to the platform for views of the Gold Coast’s famous 70 kilometres (43 miles) of beaches. Once you’re back at ground level, host a creative sand-sculpting competition.

Afternoon
Stop for lunch at Currumbin Beach Vikings Surf Life Saving Club, next to Elephant Rock. Known for its fresh Australian seafood and ocean views, this relaxed club boasts an alfresco terrace perched above the waves and the Vikings Room, which can accommodate up to 60 people for a seated event. After lunch, charter a helicopter transfer to O’Reilly’s Rainforest Retreat in the Lamington National Park, west of the Gold Coast. O’Reilly’s caters for groups of up to 180 people with a range of accommodation options, from single rooms to two-bedroom suites and three-bedroom villas.

Evening
After checking in, indulge in a treatment at O’Reilly’s Lost World Spa. Take a hike through the rainforest to the Moonlight Crag Lookout on the edge of the escarpment, where you can sip drinks as the sun sets over the mountain ranges, followed by a degustation dinner under the stars. If you’d rather stay close to the hotel, pre-dinner drinks can be served at the Rainforest Bar, followed by a dinner in the historic Slaughterhouse. After dinner, gather around the fire pit at the Corroboree Ring or wander through the rainforest on a glow worm tour.

Morning
After breakfast in the O’Reilly’s Dining Room, there are several outdoor activities to choose from. Have your photo taken with a wedge-tailed eagle or join a tour of the World Heritage–listed rainforest via Segway, led by an on-site guide. Transfer to sister property Canungra Valley Vineyards, a 50-minute drive away in the Scenic Rim region, where your team members can stomp grapes and test their palates in a blind wine tasting. For lunch, enjoy a classic Australian barbecue or picnic hamper within the winery grounds, paired with wines from the surrounding vineyards.

Afternoon
Take a 40-minute transfer back to the Gold Coast for an afternoon of shopping at Harbour Town in Biggera Waters. Visit the VIP lounge to recharge with complimentary refreshments and collect your card for exclusive discounts at more than 100 participating stores, including local designers and high-end labels. Afterwards, charter a luxury yacht with Cruise Gold Coast for a sunset cruise with sparkling wine and seafood platters on board the 39-foot (12 metre) catamaran Life’s Good on the Gold Coast Broadwater.

Evening
To make an entrance everyone will remember, hire a fleet of fire trucks from Fire4Hire, which can carry up to 67 people. Or for transfers on two wheels, arrange to have a group of Harley-Davidson motorbikes drop you off for dinner at Seaduction Restaurant and Bar. Known for its views over the beach at Surfers Paradise, Seaduction offers a contemporary menu of local, seasonal produce from executive chef James Fiske. For intimate groups, book the opulent private dining room, with seating for 10 people.

Morning
Start your day at Sea World, 15 minutes north of Surfers Paradise. Begin with a hot buffet breakfast at Dolphin Beach before joining the park’s dolphins in the water for a close-up encounter. Have your photo taken with a seal or while patting a dolphin, then walk to the Sea World pier, where you can board a jet boat for a thrilling ride around the Gold Coast’s waterways. Next, sign up for a private surfing lesson with the Gold Coast Surf Academy at Surfers Paradise.

Afternoon
Arrive at SkyPoint in Surfers Paradise in time for lunch at the Bistro + Bar on the Observation Deck. Afterwards it is time for the 90-minute SkyPoint Climb, which takes you 270 metres (886 feet) above sea level to the top of the Q1 building, the second-highest public vantage point in the Southern Hemisphere. Or if you’d rather stay at ground level, book a surfboard graffiti art class with Banana Life, where you’ll create a colourful souvenir of your time in Australia. This hands-on session is suitable for groups of 10 to 100, and local artists will be there to help design, stencil and spray-paint each board. Once finished, the boards will be lacquered for longevity before being shipped home to you.

Evening
End your Gold Coast experience with an evening at one of the region’s theme parks, a 20-minute drive northeast of Surfers Paradise. Choose from a Batman, Scooby Doo, or Casablanca-themed event space at Movie World. Or visit nearby Dreamworld, where a range of unique venue options include intimate dinners on Tiger Island, a car-themed event in Brock’s Garage, an Indigenous experience in the Dreamworld Corroboree grounds or a gala event on Main Street. 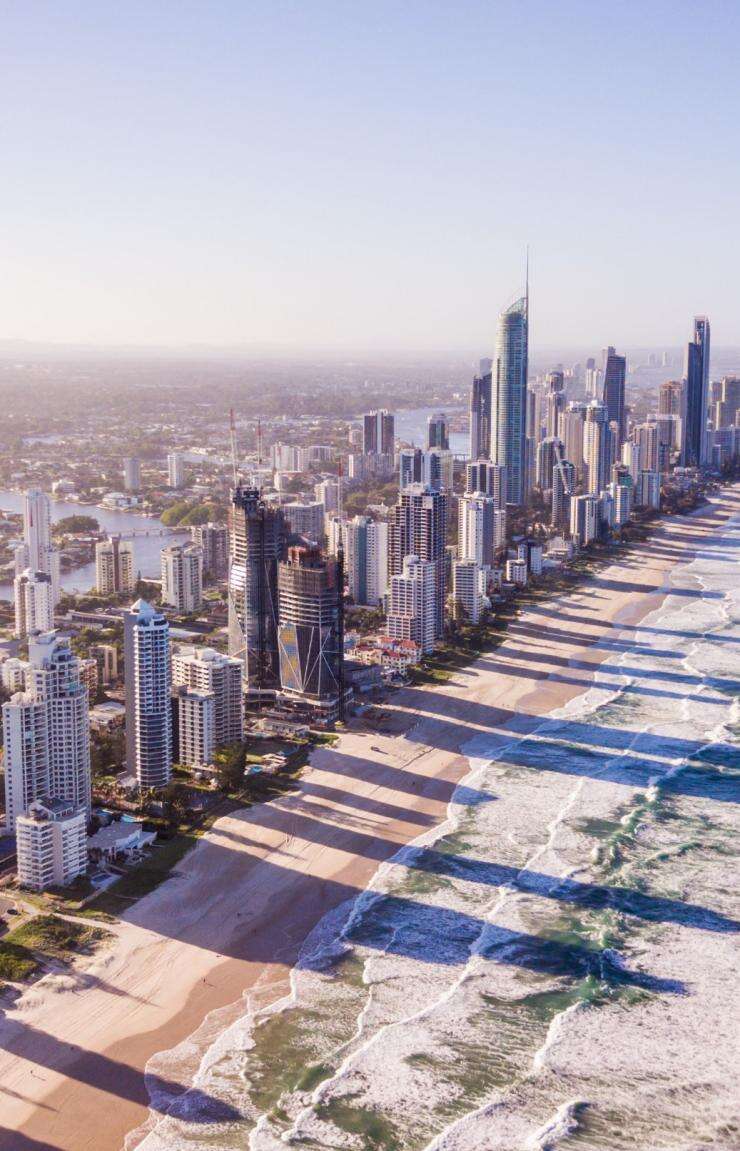 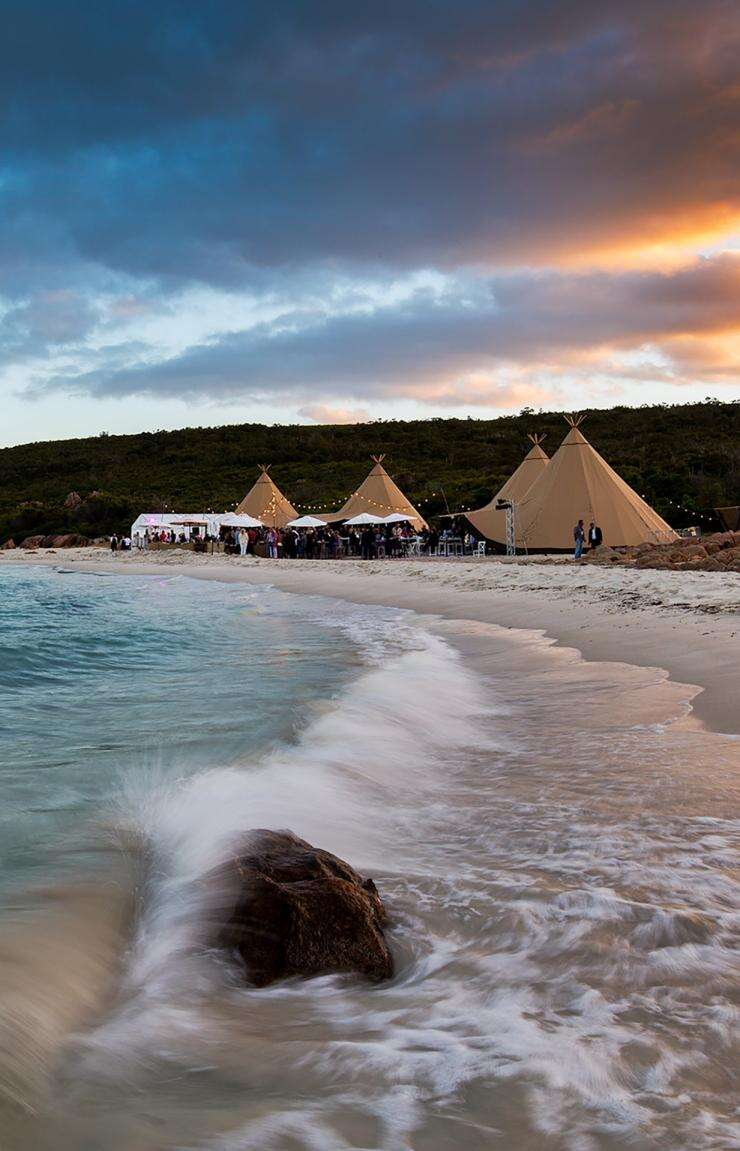 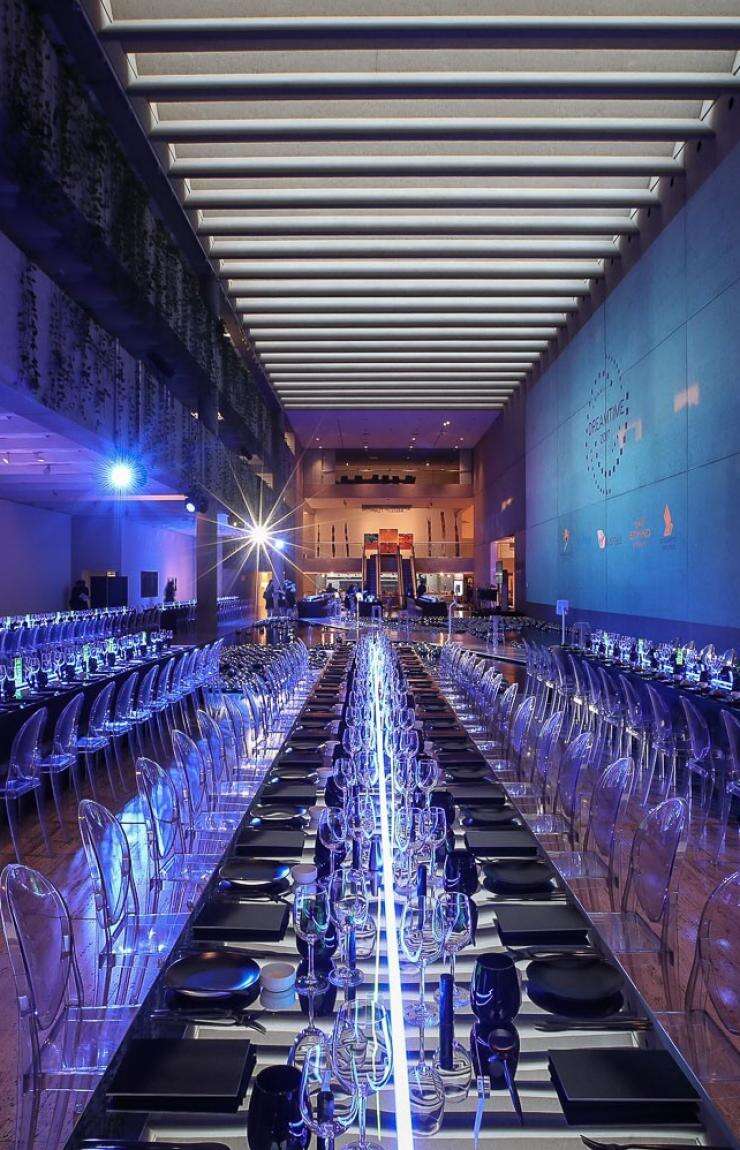